You are here: Home / ישיבת הכנסת

Statements on Soviet Jewry in the Cabinet and in the Knesset by Prime Minister Peres, 17 and 18 November 1985.

On the eve of the Reagan- Gorbachev summit conference, the prime minister addressed both the Cabinet and the Knesset on the issue of Soviet immigration. He did not see any contradiction between public action and quiet diplomacy in the struggle to let Soviet Jews go to Israel. He called on the American and Soviet presidents to devote time to the matter and on the Russians to free the remaining Prisoners of Zion. His statements were in reference to an on-going debate among Jewish organizations on the best manner in which to pursue the issue. Texts:

We will open the meeting – it is also open to the communications media – with the subject of Soviet Jewry. This Tuesday a summit meeting will take place between President Reagan and Mr. Gorbachev, and it is fitting that the voice of the Israel government also be heard on a subject of vital concern to us: the future and the fate of the Jews of the Soviet Union.

I want to state at the outset that there is no inevitable hostility between us and the Soviet Union. To the contrary: We do not regard ourselves as being in conflict with the residents of the USSR or with its government. But the issue of the Jews there the third largest Jewish community in the World – is one that disturbs us, and we shall not cease to deal with it because in this instance it involves a subject that does not belong exclusively to the political realm, but to the moral and historical realm.

This is a Jewish community in our time on which constraints have been placed, which has been prevented from reaching safe haven. I think that our call is in the first place of importance for the Jews of the Soviet Union themselves. They ought to be aware that their fate stands at the center of our attention and at the forefront of our interests. This state was founded in order to rescue Jews, in order to ensure the future of Judaism, and we view this struggle as a central, historic struggle in our annals.

I must say that when it comes to means of action, we do not propose rejecting one means at the expense of another. By that I mean that we do not propose to conceal this struggle or obviate its public dimensions, yet we are also ready to pursue the struggle via quiet diplomacy. I see no contradiction between the two: On the contrary, I regard this struggle as one not of the State of Israel alone, but of the entire Jewish people, indeed a struggle of the entire civilized world.

Indeed, we must bear in mind that the partners to this struggle include states, movements and organizations, some of them Communist in character. This is perhaps the only struggle in which even Communist [parties], some of them in Europe, do not cease to affiliate themselves with the heartfelt cry of 'Let My People Go,' with respect to Soviet Jewry.

We have examined all the informal and formal talks that have been held between ourselves and representatives of the Soviet government, and the chief criticism that we in fact heard related to the dropout phenomenon. I must say that on this matter our position is identical with that of the Soviet Union: We too are interested in putting an end to this phenomenon, and we too are interested in having a Jew who receives a visa to go to Israel, actually go to Israel. It was to that end that we signalled and stated publicly that we are ready to act in concert with the Soviet Union to enable direct flights from the USSR to Israel, with Israel being both the country of destination and the country of choice of these people. To the best of our knowledge, hundreds of thousands of Jews in the Soviet Union have requested a visa to immigrate to Israel, and their request should be acceded to.

Never have we despaired in the course of this struggle, and today too we are waging it not because we have a specific assurance in our pocket, but because we have a great concern in our heart, both for the fate of Soviet Jewry and for their ability to conduct a Jewish life: To study their language, to learn their history, to maintain the tie between the Jewish people and this major segment of its body; as well as a vigorous demand for the release of the prisoners of Zion, those people who have been arrested for the sole reason that they are what they are: Jewish people with a prayer in their heart to immigrate to the Land of Israel.

I must say that of all the contacts that have recently taken place, I know that as regards some of them, representatives of the two superpowers, of the U.S. and of the USSR alike, have requested that we relegate them to the sphere of quiet diplomacy – and we do not object to their conducting quiet diplomacy, we shall go on with our public diplomacy.

But out of all these contacts there are several ostensible signs that the USSR is apparently ready to discuss, at a later stage, the unification of families. There are the latest reports I have available, and I want to inform the cabinet of this as well.

These are indications, not assurances. I do not want to create the impression that there is agreement on the part of the USSR to one thing or another.

I had a very touching talk, in the name of this government, with U.S. President Ronald Reagan and with Secretary of State George Shultz, and I did so as did my predecessors in office, as the foreign minister did, time after time, in order to advance this subject, which for us is truly a central one. And I was greatly impressed by the readiness of the United States, France and Britain, and, as I noted, of many intellectuals, states, parties and other organizations to stand by us in this campaign.

We call upon the two leaders – U.S. President Reagan and Soviet leader Gorbachev – to devote to this issue the place it deserves, as a unique issue transcending the rest of the problems on the agenda for discussions between the two superpowers.

In conclusion, I would like to wish the meeting every success. I think that the eyes of the entire world are focused on this meeting. Every person of good will and responsibility hopes in his heart that this meeting will produce results which will remove the threat of conflict and confrontation from the world, as well as the atmosphere which engenders negative expectations. We have faith in their good will and we wish them complete success."

Statement in the Knesset

The past century has seen three positive encounters between the Russian people and the Jewish people.

The first was when the Russian revolution inscribed on its banner the rejection of anti-semitism. Tzarist Russia was consumed by declared anti-semitism and by antisemitism in practice.

The second time was in the Second World War, when the Soviet Union pitted itself against the Nazi aggression, and Jewish soldiers and Jewish partisans found themselves not only in the same trenches but also on the same front.

The third time was when the then-Soviet Ambassador to the UN Andrei Gromyko declared at the UN General Assembly that 'the aspirations of an important part of the Jewish people in the world are bound up with Palestine, and with the future of that land. The Jewish people underwent terrible suffering in the Second World War… six million Jews were destroyed by the Fascist occupiers… the Jewish people must not be deprived of the realization of its national aspirations.'

As against the encounters of understanding, there are also fronts of debate.

Unlike the United States, which is an alliance of states bearing a geographical character, the Soviet Union is an alliance of states bearing an ethnic character. Every nationality has its state within the framework of the USSR. With one exception: The Jewish people. The country of the Jews, including the Jews of the USSR, is Israel. The heart of most of them beats in Zion.

The last five named were imprisoned since Gorbachev's accession to power.

We do not regard the USSR as an enemy. No war prevails between it and us. We do not agree with the system that exists there, but we have not come to combat it or to undermine its personages. Despite the deep differences, we have one interest: The Jews and their Jewishness, Judaism and its Jews.

We believe with a perfect faith that the day will come when the curtain of Russian adamancy will be lifted, and from behind it there will come to us directly, an immigration of longing and dedication, Jews who have not abandoned and will not abandon Jewish history, the banner of Zion.

Is this merely en ephemeral phenomenon or is it good tidings?

Tomorrow, millions of people will cast their eyes to Geneva in the hope that the leaders of the two superpowers will place on their agenda the humane item as well, and not just their own self-evident interests.

We agree with the Soviet Union that what is at stake is not just emigration from the Soviet Union, but also immigration of Jews to their destined land. We favor direct flights. And agreeing with us on the realization of this right are peoples and movements, personages and parties from the entire political spectrum in the world.

We shall not rest until this hope materializes. We shall demand it aloud, we shall insist on it with diplomatic voice. In its support we shall enlist the Jewish people, and for it we shall enlist the voice of all pursuers of justice everywhere. All those of whom Marx himself, applying the saying he liked best, noted that "nothing that is human is alien to them."

President Reagan, the Secretary of State and the other heads of the U.S. administration have more than once manifested a touching attitude towards this fundamental question of the Jewish people. And I have reason to believe that this subject will appear on their agenda as it does on our own agenda.

If in fact the Soviet Union is interested in peace in this vital region, it must understand that peace can be made only by taking into consideration both sides to the conflict, and not one side alone. And only via dialogue between them, not via pressure on them.

He who wants a world of peace must adopt a policy of justice. Justice for human and national values, justice for the sides involved in a conflict which they seek to terminate. 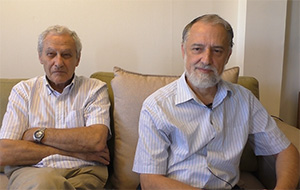